“It’s much more than I originally thought!”

These guys love it! John Benny & Jaron Fraser of Haka Valley, Kurow are very impressed with features of their new Katipo 1150 litre 12 metre sprayer. “it’s much more than what I originally thought“ says John. Previously they were using a contractor, now they spray at 150 litres per hectare at 10km/h and are reaping the benefits from timely application and reduced cost. 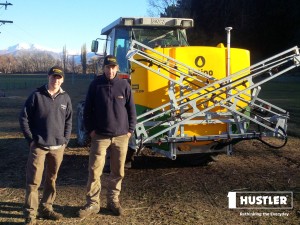