Running just under 6000 acres with a mixed operation of cattle, with a breeding herd of Herefords as well as Merino and Dohne ewe’s and breeding Lambs, and hardly a blade of grass in sight for his herds to eat, James Bishop is faced with enormous costs of needing to buy in feeds. To preserve his feeding budget, James has resorted to sourcing whatever feeds he can get his hands on hay, straw, rounds, squares, grain and even Almond hulls are part of the diet!

Thinking ahead, James saw the need to invest in a feeder that gave him the flexibility to feed out any feed type he could locate, but most importantly reduce the amount that is wasted.

Having the flexibility to feed hay into Flexifeeder troughs, and feeding directly into the fields has helped thanks to the tilting elevator allowing the operator to accurately place the feed without spilling over the edge of the troughs, and it gives the ability for the operator to determine how much the hay is teased apart.

Being able to load the Almond Hulls directly into the wagon, along with bales enables the mix to be distributed equally in the feeding troughs without spillage or waste. James spec’d his Super Comby with the optional grain bin, which distributes and even trail of grain over the hay for the sheep and he was impressed with the way that grain is not falling through the hay and getting lost which has cut wastage of grain to a minimum.

It also enables him to dispense grain evenly straight into the field without having to feed hay, making for a multipurpose machine that is also saving him trips to the field.

The Grain Feed system has been designed primarily to deliver a measured amount of grain either on top or beside the feed or by itself and has an adjustable feed control unit. James is using his Super Comby as a ‘runner’ between the mixing wagon and the various fields when needing a thoroughly mixed ration, this has been saving time and makes for a one person to get the feeding done each day. While the operator is out feeding each herd, the old TMR can be grinding up another load ready to load and go.

“We’re impressed with how much labour

it takes out of the work” See what James Bishop had to say: 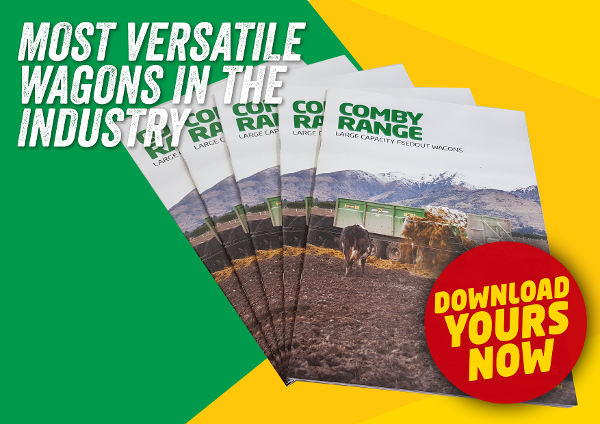 Brenton Hore and his father visited their dealer to look at getting a new tractor for their sheep and beef cattle operation when they saw Hustler's new Regener8r LM630 chain harrow. They bought it...Read More

Frank Archer from Landfall Angus in Tasmania, Australia has purchased two Hustler Combi RX178 a little more than a year ago. Having completed one feeding season with the machines, he is very happy...Read More