Drew Kennedy farms in Aberfeldy, Scotland and discovered Hustler Unrolla LX105 bale unroller on a YouTube video. He requested a demo from his local Hustler dealer and the machine never left the farm! Today, Drew is using the unroller on his JCB telehandler and is able to feed his different mobs in a few minutes, saving about one hour every day. He is also managing to save lots of hay. Watch his video testimonial to find out more.

We visited Tom of Cluny Farm in spring, where we met farm owner and manager Andrew ‘Drew’ Kennedy located in Aberfeldy, Highland Perthshire “right in the middle of Scotland.”

Perthshire is known as the “big county”, or “the Shire”, due to its roundness and status as the fourth largest historic county in Scotland. It has a wide variety of landscapes, from the rich agricultural straths in the east to the high mountains of the Southern Highlands.

Drew Kennedy runs a cattle beef operation on a 420-acre upland unit, with about 200 head of cattle, half of them being suckler cows, consisting in Belgian Blue cross, British Blue cross Friesian put to a Limousin bull.

The herd is fed almost exclusively with “homemade silage, which is all made with under sown barley, cut and put into bales,” Drew explained.

In the past, Drew was “used to put bales in feeders and bunkers, and the cattle were spending half the day trying to pull the feed out,” Drew said. Even though dropping entire bales in feeders doesn’t require a lot of gear (except maybe a good pitchfork), Drew wasn’t happy with that system which didn’t allow to maximise the cow’s feed intakes – a primary concern, especially in a fattening operation. He tried to mechanise the operation, but he “had previous machines that required a lot of maintenance” that impacted badly the farm’s bottom line.

In short, finding the best way to feed his herd was a real headache for Drew.

“The first I ever saw of a Hustler was actually watching on a YouTube video, believe it or not,” Drew said. Hustler maintains a regularly updated YouTube channel with testimonial videos and product news. “When I saw this machine working, I thought it has the potential of really working here at home. I asked if I could get a demonstration and the demonstration worked incredibly well,” Drew recalled.

Drew bought an Unrolla LX105 mounted bale unroller that he uses mainly at the front of his JCB telehandler. Indeed, the Hustler Unrolla LX105 can be fitted on a 3-point linkage or on most of the front loaders or telehandlers available on the market today.

The Hustler Unrolla LX105 bale unroller has been designed for both outdoor and indoor feeding in dead-end, narrow stables as the Unrolla headstock connects from both sides of the feeding cradle and feeds out to both sides as well! It is also lightweight and compact enough to be operated with small tractors or loaders for increased maneuverability.  Feeds out all round bales, hay or baled silage, loose silage, maize, fodder-beet and even misshapen bales. The integrated tines for easy loading mean there is no need for another tractor to load the feeder. “We’ve got four different types of ways we feed cattle here, and it does them all,” Drew confirmed.

“This seemed to be a very simple machine, little or no maintenance”

Thanks to the fully enclosed Polyethylene floor there is no risk for feed to fall out. It is also UV and shock resistant and doesn’t corrode like floors made from steel. The slipperiness of the polyethylene reduces torque and makes it easier to turn bales compared to a steel surface.

Hustler used the toughest roller chains on the market with larger diameter rollers and pins for less wear and longer life. The extra-strong shark teeth are designed to release the feed at precisely the right moment and can easily be swapped for a flatter option or replaced, as the system is bolted on.

“This seemed to be a very simple machine, little or no maintenance, and I think it will last a long time,” Drew said about his Hustler machine. The Hustler patented Snaplox system helps to reduce loading time. Snaplox is a hands-free auto-connect and disconnect system that lets you disconnect the feeder by simply lowering it to the ground.

“They fill themselves quickly, and then they can just go back and lie down and thrive. And we noticed a big difference in our cattle this year. And as much as they fleshed up quicker, simply because they didn’t have to work too hard for the feed,” Drew explained.

“We noticed a big difference in our cattle this year” This finding by Drew is supported by scientific research. Ron Lemenager, Professor of Animal Science at Purdue University in Indiana in the US, conducted research over a three-year period to study how much hay was consumed when cows were given only a limited amount of time to eat. Forage intake was reduced by as much as 75%, 60%, and 33%, respectively, when cattle were restricted to one, two, or three hours access to hay compared to cows having free access to hay – with no difference in cow weight change. Click here to read the full summary of the research.

Unrolla LX105 round bale feeder – 5 Key benefits in a nutshell 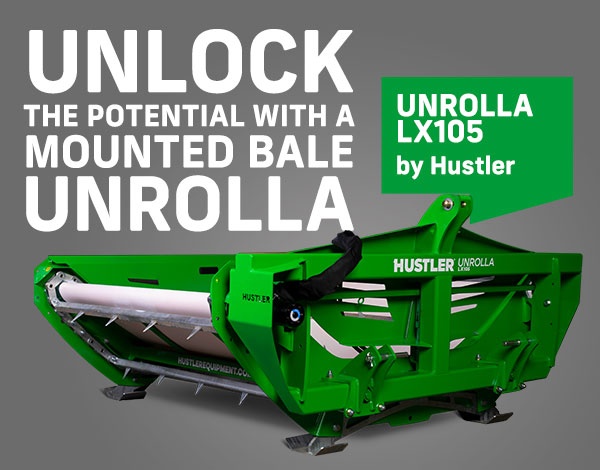 The Hallam family farms sheep in North Yorkshire, United Kingdom and bought their first Hustler Unrolla bale unroller back in 2010. They have now two more. Watch this video to see why this...Read More

Bruce Findlay is a third-generation sheep farmer on the east coast of Scotland, and found that his old system of dropping full bales into his ring feeders was wasteful and also hurting his back....Read More