The Hallam family farms sheep in North Yorkshire, United Kingdom and bought their first Hustler Unrolla bale unroller back in 2010. They have now two more. Watch this video to see why this decision was “a no-brainer”.

The Hallam family has been at Grange Head Farm since February 2003. Steve and Karen are sheep farmers at the remote hill farm, which is located within the North York Moors National Park, United Kingdom.

Steve and Karen farm 477 acres of upland hill and breed about 1,600 North Country Cheviot ewes. They also have grazing rights on Egton High Moor above the farm. The land is all grazed and occasional silage or hay crop is cut when conditions allow, usually once a year.

Being so high on the Moor, the land tends to be very wet in the winter so the sheep come down to lower pastures. This then limits the grazing during the winter months. “We’ll start feeding anytime after Christmas and everything’s fed outside,” Steve explained.

About 12 years ago, Steve was using hay rings to feed his sheep. But this wasn’t the right way for him and he “got sick of sheep breaking legs and getting stuck and just wasting a lot of haylage and stuff,” he recalled.

Looking for another solution, Steve discovered the Hustler mounted Unrolla bale feeder on a YouTube video and decided to request an on-farm demo… and the rest is history. “We bought it there and then because we were so pleased with it,” Steve said.

today, Steve owns two new Hustler mounted Unrolla LM105 bale feeders. “We still have the old one, which we will be selling which there’s nothing at all wrong with it, not one thing,” he said. And he had a good run with his old Hustler SL350 which unrolled about 8,000 bales during its career.

The climate and terrains of North Yorkshire are not kind to farm machinery. “When it’s not feeding on flat, green fields, all the hills around here and rocks, it gets some serious grief, up and down and it’s been no trouble whatsoever,” Steve detailed.

Hustler bale unrollers are true workhorses, designed to be strong and durable in all weather conditions, even exposed to mud, hilly and rocky terrains. Steve adopted immediately the ground feeding system. “It was just the idea of feeding the sheep in a long line where there’s no stress with the sheep will come and eat,” he said. “We find that you’ll waste less than ring feeders.”

“They just do not waste, nowhere near as much as you do in feeders”

Contrary to a widespread idea, using hay rings is causing hay wastage. It is often thought that hay rings hold the hay in place and prevent spoilage/wastage. However, hay rings or hay feeders encourage the creation and worsening of muddy conditions.
As a result, livestock tends to drop hay from the hay ring to wallow in it because it becomes a big swath on which stock would rather lie down than in the mud.
And it’s something that Steve often noticed: “we used to feed round bales straight into feeders and they just pulled out, I will trust, stood on it, wasted it.” Dispersing hay in long, particularly thin windrows onto the pasture, even in muddy conditions avoid excessive soil compaction and prevents long-term soil barrenness and all the erosion problems that follow. It also will discourage the stock from lying in it and remove competition between the animals by creating an even and easy access to the feed.
“You can just go in a line you can go coming off as quickly as you can or slow as you can,” Steve said.

After feeding hay, “the following day, we’ll go with this quad bike and snacker, and we’ll feed the ewe rolls on top of where they were feeding the day before. So if you get a lot of snow, they don’t
have to dig for the ewe rolls, it’s there, and we’ll make a huge saving on the haylage,” Steve explained.

For Steve, the best part is certainly the fact that since they switched to Hustler, they save a huge amount of time and back pain. “We don’t fork haylage to any sheep anymore – the days have all gone like we used to be pulling it out of feeders and we don’t do anything like that now. It’s just saved your back and everything. It’s just so much easier. A lot of time saved, a lot.”

“I’d recommend it to anybody. Just get one on demo. And you’ll see straight away. It’s a no-brainer as far as I’m concerned,” Steve concluded. Unrolla LM105 round bale feeder – 5 Key benefits in a nutshell

Do you want to know more about Hustler bale feeder range? Contact us today for a chat or a demo, you’ll be glad you did! 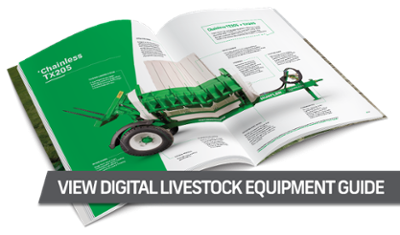 Drew Kennedy farms in Aberfeldy, Scotland and discovered Hustler Unrolla LX105 bale unroller on a YouTube video. He requested a demo from his local Hustler dealer and the machine never left the...Read More

Bruce Findlay is a third-generation sheep farmer on the east coast of Scotland, and found that his old system of dropping full bales into his ring feeders was wasteful and also hurting his back....Read More