Ranchers have had enough of Traditional Bale processors.

Ranchers in the Sand Hills of Nebraska are switching from traditional methods of feeding Cattle and are blown away with the results they’re achieving from their new low disturbance Hustler bale feederThe United States is well known for their ranching traditions, especially with their ranching practices, being taught from generation to generation. For example, many ranchers have been brought up using traditional flail type Bale Processors and Bale Unrollers.

Peter Pelster, a Rancher from Thayer County, purchased a Hustler Bale feeder for his ranch a few years ago and soon realized that Hustler would be the way of the future and a ‘Must Have’ for Nebraska ranchers. Since then, he has added Hustler Equipment to his Ag equipment company, Eureka Valley Ag and has become a specialized Hustler Dealer.

While we were visiting Nebraska we were privileged enough to go out on a demo, bringing Hustler to a Cattle Ranch in the Sandhills of Nebraska, and this is what we found…

For years ranchers have witnessed traditional Bale Processors smashing the nutritional leaf to powder, which is typically seen as a green dust cloud following the tractor & processor and blowing away in the wind. This has left ranchers looking for a method to feed the cattle and retain the nutritional leaf in tack to maximize feed utilization and nutritional uptake. Although traditional bale unrollers retain the leaf on the stalk, they unroll the bale in a very wide swath causing the cattle to have to walk into the swath when eating it, wasting good hay by trampling it into the ground and manuring on it.

Hustler’s hydraulic powered design not only gently unrolls the bale, but it places it in a long narrow windrow. This combination means that the leaf is carefully retained on the stalk and is consumed by the cattle. Because of the narrow windrow, the cattle tend to stand at right angles to the windrow (similar to how they stand at a bunk). This saves feed by not walking it into the ground. Because the cattle consume the stalk and leaf, the diet is much more balanced with a bit of roughage added to the highly nutritional leaf. Recent studies have found that these methods are not able to reduce the amount of hay waste. Not only does the chopping reduce the nutritional value of the feed but the wide windrow causes hay to be trampled on. When hay is trampled on, or contaminated with manure, animals refuse to consume the forage and as much as 40% of the hay can be wasted. It has been evident that feeding losses associated with traditional cone, ring, portable trailer, and cradle feeders were much higher. Feeding hay without a physical restriction such as a rack to prevent the cows from trampling on the hay resulted in less waste but still significant waste causing cows to have less nutritious feed. When cattle consume feed with a head down position, less hay was thrown up over the shoulder or onto their backs. Animals tend to toss more hay when they consume feeds with their heads up in a horizontal position rather than in a head down position commonplace with eating off the ground or pasture. Our unique Hustler   3 -1 ratio teases bales apart rather than simply unrolling it, retaining the highly nutritional leaf, making the feed more palatable for stock and reducing the amount of bale wastage keeping more money in your back pocket.

We recommend booking a demo on your own ranch, with your own bales to see just how much of a difference a Hustler can make to your operation and your back pocket. Go ahead, try it! 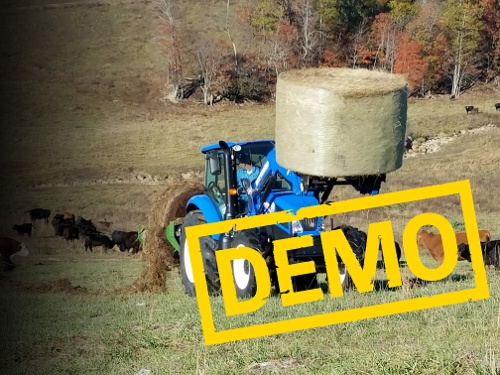