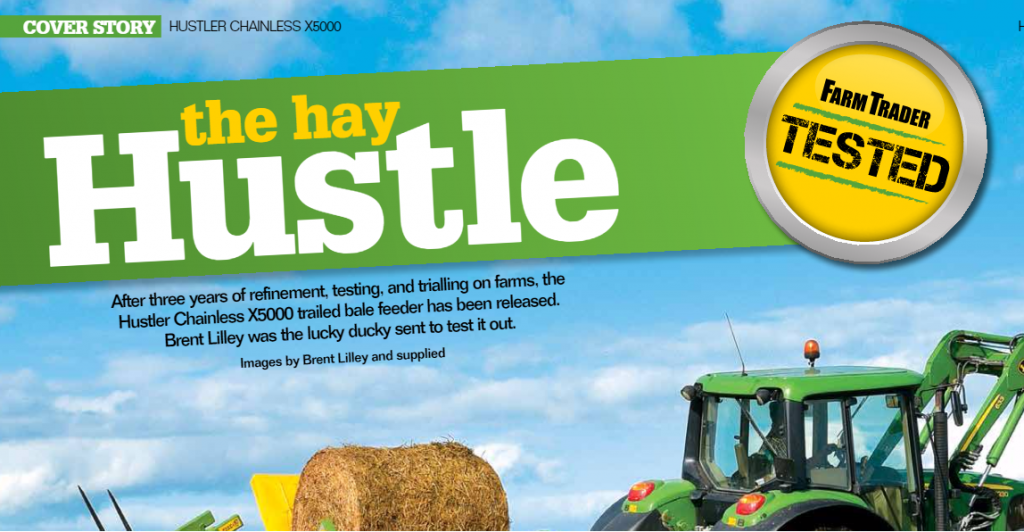 After three years of refinement, testing, and trialling on farms, the Hustler Chainless X5000 trailed bale feeder has been released. Brent Lilley was the lucky ducky sent to test it out.

Here’s the review which featured in Farm Trader…

We’re an inventive bunch here in New Zealand, and while the ability to fix anything with a piece of No 8 wire may be waning because of the complexity of most new machinery, the ‘have-a-go’ mentality is definitely still alive. Some of the best ideas out there have come from farmers having a beer around a fire, or leaning on the rails at stockyards. In my opinion, a company looking to the end users of its products for new ideas is a recipe for success, and one company I recently discovered doing just that is Hustler Equipment. Hastings-based and family-owned and operated, Hustler Equipment has been manufacturing innovative machinery to suit New Zealand conditions for over 50 years and strives to stay ahead of the game. When it set out to build a new, bigger, better bale feeder, the goals were simple: build a machine that could handle any bale thrown at it. The first thing Hustler did was go to farmers already using its machines and asked them what they wanted. Then, after more than three years and 10,000 hours of refinement, testing, and trialling on farms, the Hustler Chainless X5000 trailed bale feeder was ready for release. And I, for one, was stoked to get the opportunity to check it out first-hand recently. Cricklewood Angus operates on Tahaenui Station at Nuhaka, near Wairoa on the east coast. It feeds out a serious amount of supplements over the winter months to its cattle and has recently purchased one of the first production machines out of the factory, albeit after some fairly rigorous testing. Having already fed hundreds of bales of different types of feed through the machine over the last few months, Cricklewood is more than pleased with its decision and speaks incredibly highly of the machine. For the test, there was a mix of round and square bales of hay and silage on hand to demonstrate just how versatile and easy to use this machine is.

Construction
At first glance, you realise pretty quickly this is a seriously well-thought-out and heavy-duty machine. An adjustable height, 50mm cast, swivel towing eye (rated to a whopping 12 tonnes) is found at the front of a solid single-beam drawbar that allows for tighter turns. A hose needle incorporated into the drawbar keeps hoses tidy, prevents fouling, and provides storage when they’ re not in use. A heavy-duty screwjack makes unhitching easy and is stored out of the way on top of the drawbar, so it’s always there when you need it. Probably the best thing since sliced bread is a 140-litre moulded plastic box that sits above the drawbar in front of the feeding table, providing a convenient storage place for net and plastic wrap keeping it out of the cab. A welcome improvement, however, would be drain holes in the bottom to let that lethal brown silage juice out — easily fixed with a cordless drill. A box section chassis supports the feed table and distributes the weight to the drawbar and wheels, as well as giving the machine a smooth underside to prevent snagging when crossing over lowered break fences. Hefty, 60mm, solid square section stub axles at the rear are slightly cambered to ensure the wheels run true to the ground when loaded, for even tyre wear, while a wide wheel track and standard 13/55 R16 tyres increase stability on slopes and minimise compaction. Moulded polyethylene mudguards are standard and will be welcomed by those who like to keep their machines looking tidy. The lack of road-lights may cause problems for those operating on busy roads, as visibility of the tractor’s lights is obscured by the bales — although I’m told road-lights are set to be an option in the very near future. 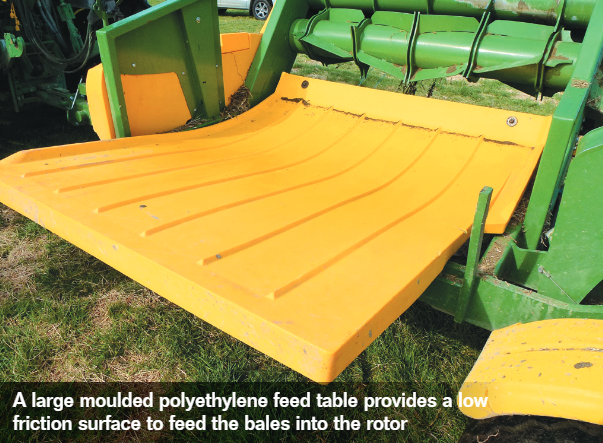 Feed table
A single-piece, non-corrosive moulded polyethelene table, supported on a steel frame, is used to hold the bales as they are fed out, and like the rest of the machine, has been considerably beefed up from earlier models. Raised ridges have been moulded into the surface of the table, not only helping keep the bale straight and square to the rotors, but also reducing the friction by 30 percent and therefore the power required, allowing a wider range of bale types to be fed out. Another somewhat-less-obvious advantage is it’s easier to pull the strings out from under square bales, and a tie rail under the platform is useful for any stubborn strings. The platform pivots on heavy-duty bearings, rather than nylon bushes, and a hydraulic ram tucked underneath raises it to present the bale to the rotor. By far the single biggest difference though, from any previous model, is the deeper bale chamber and the table has been extended to over five-foot long, for greater flexibility. Although five-foot-wide round bales are not so popular here anymore, they are in other parts of the world Hustler exports to. The added benefit when feeding four-foot-wide bales is there is room around the bale for the operator to remove the net. Some have also suggested that with some clever loading, it is also now possible to get two smaller, medium square bales on the platform to feed at the same time. So the X5000 has pretty much all bases covered, with the ability to feed bales that are four- or five-foot wide and up to six foot in diameter, and any-sized square bale, although a optional extension for the table is required for bales over 6’6” long.

Rotors
Two rotors on the right-hand side of the machine are at the business end, with five rows of choppers (instead of four), or teeth, on each rotor, and the new, patented axial rotor with paddles that feed towards the centre to keep the bale centred and even on the feed table. Their unique shape, and the fact the top rotor turns three times faster than the bottom, means they will tear even the tightest pack bales apart as they turn. When it comes to wet, soft silage, only the amount of material the teeth can grab is fed out, minimising the potentially problematic lumps for bale feeders with floor chains. The top rotor is timed to clean the material of the bottom rotor and a wiper panel ensures material is cleaned off of the top rotor. It is then dropped clear, outside of the machine’s wheel track. Cleverly, this wiper panel can be unlocked and lowered to remove any material that gets wedged in between it and the rotor. An optional wiper panel extension can be used for feeding into troughs or over break fences. The hydraulic drive motor has been moved to the rear to prevent damage if the machine is jack-knifed — a welcome change. Also impressive, the shafts and bearings have been beefed up to a 40mm diameter. Self-tensioning chains transfer the drive from the motor to the rotors, and are enclosed under a guard to keep the machine safe and tidy, as well as preventing them being covered with hay and mud. The entire drive system is now located under one cover which reduces maintenance, and the self-lubricated chains provide silent operation so stock aren’t spooked as they’re being fed. 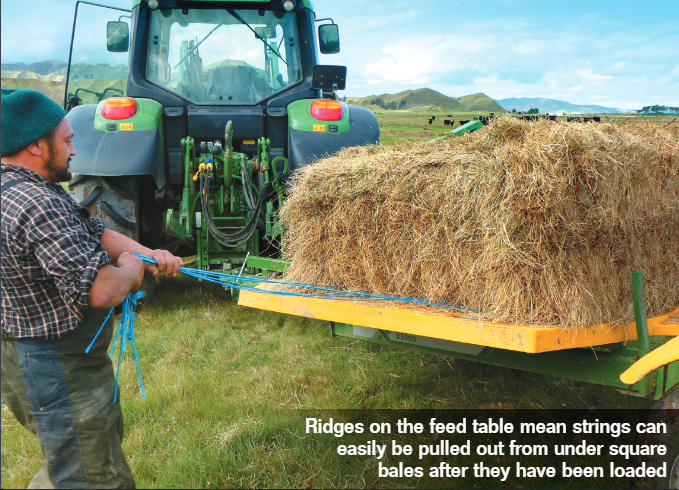 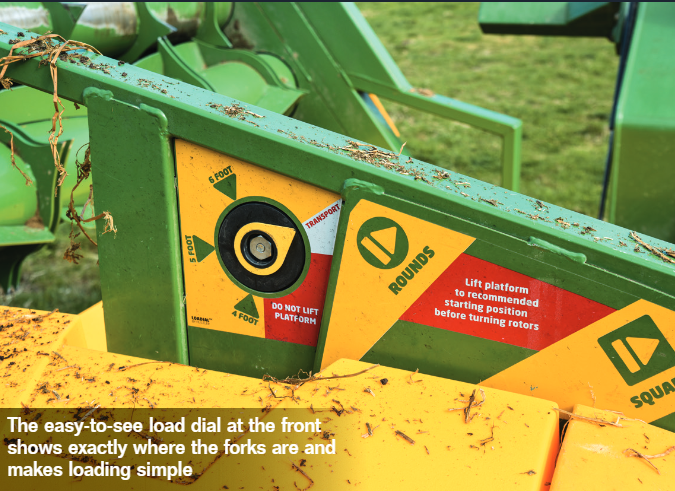 Loading
The ability to self-load and carry a second bale is a key feature of trailed machines, and the team at Hustler has gone to great lengths to ensure its system is effective, simple, and easy to use. At the back of the machine the loading arm mounts to the chassis directly above the stub axles, for improved stability and weight distribution. Some seriously-thick steel plate, a cast linkage, and a heavy-duty hydraulic ram have been used in the construction of the X5000, to make sure it stands up to the rigours of carrying the heavier 1.5-tonne bales. The headstock on the load arm features two high-tensile forks to spear the bale (provision has been made for an extra fork for loading eight-foot-long square bales). Once the bale is speared and raised into the transport position, it is held securely and much of the weight of the bale is supported by the headstock. After the bale is loaded, a cam system in the load arm pulls the forks squarely out of the bale, making sure the bale is always left on the feed table, while a gas strut resets the forks into the loading position, ready to spear the next bale. The patented total control loading system, uses a single hydraulic ram and a clever mechanism to load the bale which is safer and simpler than sequence valves and allows the bale to be unloaded if necessaryNew on the X5000 is a load dial on the front of the machine, using a cable to the loading arm to show you exactly what position the rear forks are in at any time, and exactly what position they should be in to achieve your desired operation — very handy once you have a bale on the machine and are picking up a second. As it is important the bale is speared at the correct height, the forks are lowered until the arrow corresponds with the marked bale diameter. As they are raised, the dial moves to show the correct transport position. The dial also shows when the forks are in a position where the feed table should not be raised. Although not a necessity with the load dial, an optional loading camera can be fitted to the machine to make the loading process even simpler.

Controls and operation
Controls are kept simple. Under the feed table, a plunger valve diverts oil away from the rotors to the load arm when the feed table is lowered, then back to the rotors when it is raised. Not only does this mean that only two sets of remote valves are required to operate the machine, but it also acts as a safety to guarantee inexperienced operators lower the feed table to the correct position before a bale is loaded. This is another clever idea integrated into the X5000. The two sets of hydraulic hoses feature colour-coded handgrips on the ends, ensuring they are easy to connect and always in the correct order. Feeding is equally as simple. An easy-to-see FeedGuide shows how high the table should be raised, depending if it is a round or square bale to begin feeding. In practice, the table hardly required moving again when feeding round bales, although squares took a little more attention. Very handy is the ability to shift bales around with the machine — they can be loaded on the table and carried with the net still on to the desired location, then tipped out over the rotors by raising the feed table right up.

Summary
The Chainless X5000 is a credit to Hustler. It has been well thought out and very well built. The company has achieved its goal of building a machine that will feed out virtually any size or shape of bale, of almost any type of feed.