Gerard Coll from Timaru has been farming all his life. When he recently retired and his farm in North Canterbury was sold, the two Hustler bale feeders that were running on the property since 2004 stayed with the new owners.

A new Hustler Chainless LX104 was purchased for his scaled-down lifestyle operation, as Gerard didn’t see himself going back to the pitch fork or compromising on quality, when it comes to his farming equipment.

Gerard, who ran 4000 stock on his North Canterbury farm before downscaling recently, owned two Hustler bale feeders simultaneously since 2004, which fed around 500-600 bales of baleage and 200 bales of hay mostly to his dairy grazers over the winter. Both machines were well used and “anything that was promised these machines will do, they have done.” Before converting to Hustler bale feeders, Gerard had owned other brands of feeding equipment. When the time came for an upgrade he did his research and talked to friends, who swore by the Hustler machines. The excellent reputation Hustler has, made Gerard choose these machines and he hasn’t been disappointed since.

“As long as they get serviced by the end of the season, which I do by myself, there are no problems.”

Even tough Gerard has slowed down a little, he is still running some fattening steers, about 50 ewes and 220 fattening lambs on his lifestyle property now. He couldn’t see himself going back to the pitch fork or using any other equipment to feed out. “The LX104 is a brilliant machine for what I want. I can feed small lots, big lots – whatever I like.” At this stage he uses his Chainless LX104 to feed half a bale to his steers, and feed the rest of the same bale to his ewes with a small portion being left over for the next day ewe feed run. Gerard has owned his new Hustler LX104 since June and hasn’t had any issues with it. He doesn’t expect any either. When asked what he likes about the LX104, he points out the simplicity and notes that “I don’t know what the parts system with Hustler is like, because I never had to use it. That’s what I like.” 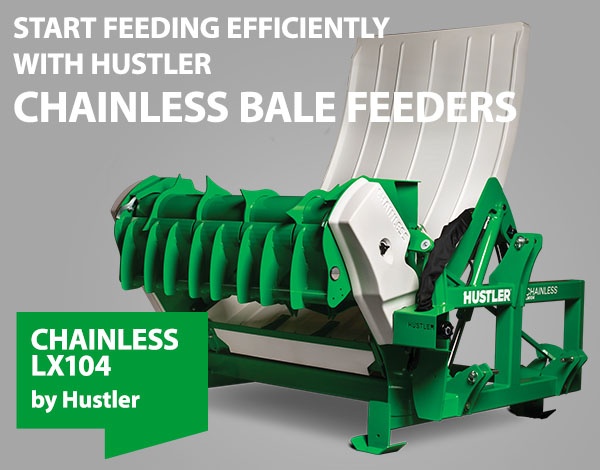