Re-Baling Your Big Bales into Small Squares? There is an Easy Way!

Why re-baling? you may ask. Re-baling your big round or square bales into small squares may be a lucrative way to on-sell your hay or straw. One big round bale can in most cases be turned into 22x small squares – you do the maths.

Or it might just be a good way for you to turn you large bales into easy to handle, convenient small bales. Often time is scarce when harvesting, so making large bales and then turning them into small bales later on in the off-season, can be a great option depending on your operation.

Also, using your Hustler bale unroller to feed a bale into a TMR Mixer can make the mixing process a lot quicker.

Whatever your intention, a Hustler bale unroller can help. The Chainless SX105 has been specifically developed for re-baling, however you can use any Chainless model to feed your bales into the baling machine.

Dennis from DLH Farms Shows Us How

Dennis from DLH Farms, has filmed a tutorial on his YouTube Channel to show how he uses his mounted Chainless LX105 (Chainless X2500) bale unroller to re-bale 5×5 round bales into small squares that are sold at the farm store. So far, he has sold 245 of them through the store.

Dennis likes the set-up of the Hustler Chainless bale feeder. The bale cradle can be unhooked from the cabin without a rope and the tractor drops away from it, while retaining the double spears that can be used for loading the bale. Read more about our Snaplox hands-free automatic connection system here or watch our 60-second video explaining the feature here.

He uses the tractor to power the bale unroller that feeds into the baling machine and shows you how he works it. While he points out that slow is the way to go at the start of the bale, once you get a good flow it’s nice and easy to feed the hay into the re-baler by adjusting the platform to the size of your bale. The speed of the rotors teasing apart the bale can also be adjusted, making sure any shape or form of bale can be unrolled. 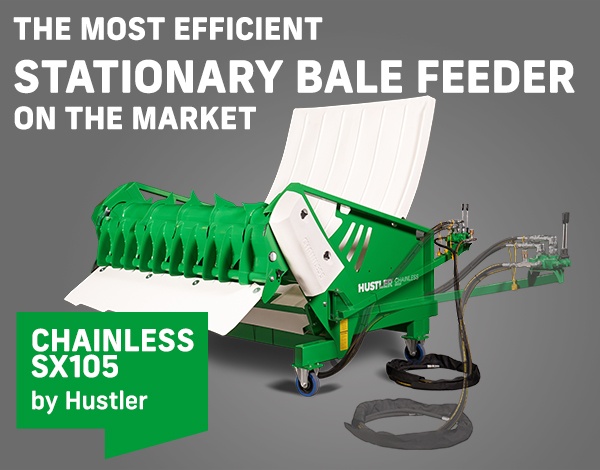