Joseph Laming bought his first Hustler bale unroller about seven years ago. Last year, he has upgraded to a Hustler trailed Chainless TX205 bale feeder model and just bought a second exact same one. Watch his video testimonial to find out why Hustler is the perfect brand for his dairy operation!

Joseph Laming has a couple of farms in New Zealand, a few kilometers from the city of Oamaru on the Pacific Coast, in the North Otago region.

The region is located on the South Island and has always been a well-established, efficiently farmed district. Farming in North Otago can be particularly rough as the region is characterized by low, variable rainfall while the pastoral potential is closely tied to investment in oversowing, lucerne and irrigation. Successful farming under difficult environmental conditions developed the managerial skill of North Otago’s farmers over the past decades and they are well-known throughout the country for their great adjustability.

Seven years ago, Joseph invested in a Hustler 3-point linkage mounted Chainless bale feeder, called CH2000 at the time (today, this model has been replaced by the Chainless LM104). As the size of his herd increased, Joseph decided to upgrade his bale feeder to a Trailed Chainless version, the Hustler Chainless TX205, able to carry two bales at the time and to feed out round & square bales.

Joseph is obviously thrilled with his machine as he decided to buy another identical one to put at work on his second farm. It was a no-brainer for him as his local Hustler dealer, Still’s Farm Machinery, is based just “around the corner“. Joseph appreciates working with Hustler bale feeders because “it’s just designed for farmers and it’s designed for efficiency,” he said.

Indeed, Hustler is a brand that has a reputation for developing its products directly with its users. Feedback from farmers allows us to constantly improve our products and to follow the evolution of uses on the farms. Of course, our products are tested on the field and in real conditions before being released on the market. The Chainless trailed square and round bale feeders are self-loading, suitable for feeding out any bale, round or square, and it maximises feed use. More efficient use of power, savings on machinery investment and faster bale feeding all add up to impressive fuel economy – made possible by the hydraulic drive system at the heart of every Hustler Chainless trailed bale feeder.

Being able to feed out two bales at the time plays a huge role for efficiency. “The loading system is just second to none, it’s so quick we’re feeding out 12 bales an hour faster than most big-sized wagons,” Joseph explained. If the single hydraulic ram of the loading system makes loading faster, it also prevents bales from falling on the operator during unwrapping – as health and safety is a growing concern on farming operations.

If you want to know more about the patented Hustler ‘Total Control’ loading system and have a minute or two to spare, we recommend that you watch our 60 Seconds of MiNT episodes:

Joseph chose to stick to Hustler for three other reasons:

Hustler products are designed to be easily handled by any farm worker. This is extremely important as it increases efficiency and versatility.

Quality manufacturing is an essential part of Hustler’s DNA. Every piece of equipment that leaves our workshops is thoroughly checked by a strict quality control. And if something does happen, we back our products with a 2 to 4-year warranty, one of the best in the industry today!

Hustler equipment is developed for worldwide use and is tested in extreme climates, from the hot Australian summer to the freezing Finnish winter!

“We can’t fault the Hustler gear, it’s absolutely brilliant and it does everything we ask it to do” 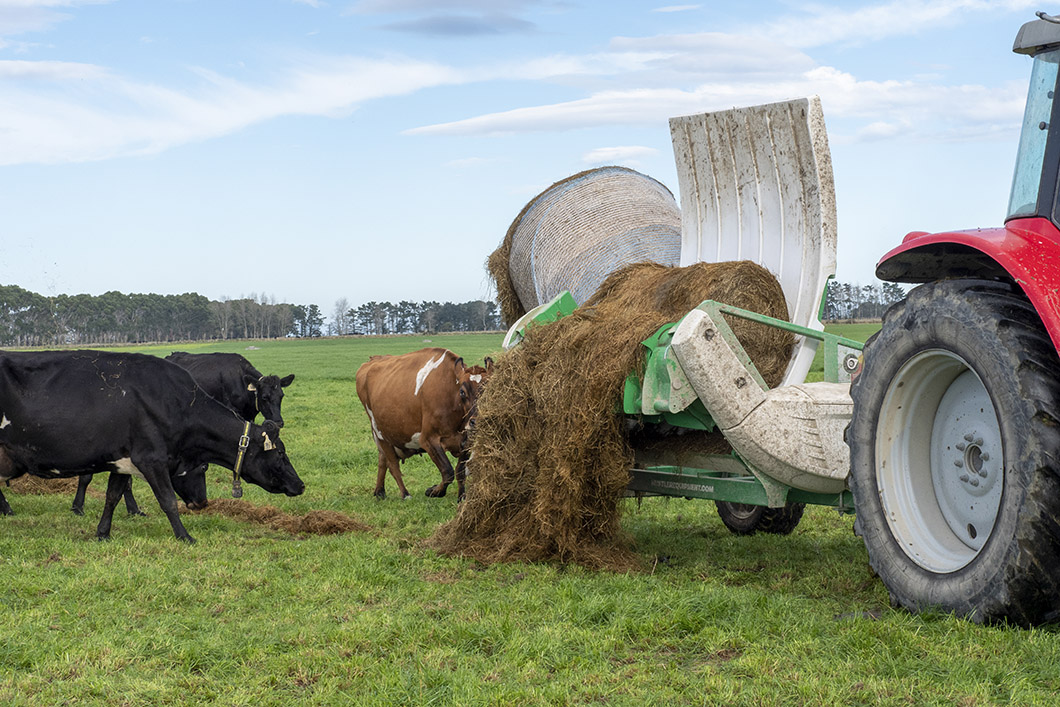 “The build quality and the strength of the unit is just absolutely superior, you’d never bend anything, never break anything,” Joseph detailed.

The new Chainless TX205 comes also with handy features such as the quick release of the wiper panel that allows easy cleaning between feeding sessions or the large capacity stringbox which is very handy for stowing the bale wraps, fencing standards and other items while you’re out and about. “It’s great to know the guys are thinking about it and making changes as they develop the stuff,” Joseph chirped, “my main driver is efficient and if we can feed out twelve bales, hassle-free, in an hour, with one wagon one guy, it’s a dream and it saves a packet.”

If you would like to know more about any of our feeding equipment, contact us today. You’ll be glad you did.