We’ve recently heard some news about one of our first chainless bale feeders. After 18 years, a CH2000 is still going strong on Bill and Sue Gerland’s farm in New Zealand. Check out what Bill has to say about his beloved machine! Bill Gerland farmd in the North central Waikato region in New Zealand. The area tends to have warm, humid summers and mild winters, with a 1,250 mm average annual rainfall which offers a decent pasture growth rate, but also has the potential for drought during summer.

Bill and his wife Sue farm 430 hectares on the western slopes of Maungatautari, located halfway between Te Awamutu and Cambridge. Here Bill runs an operation of about 2000 ewes, 400 odd cattle, along with hogget lambs.

Almost 20 years ago, Bill was on the hunt to find the perfect bale feeder, he was looking for something that would be able to feed out both round and square bales. Back then Bill was feeding out his livestock from a tray at the back of his tractor. This process was inefficient, time consuming and frankly back-breaking for Bill who feeds out 300 to 500 bales annually. .

Bill also needed a machine that was simple to use and reliable. Luckily Bill found Hustler, which has been going steady for 18 years and continues to keep working like a dream.

“We needed it to be reliable, we wanted it to last and it’s 18 years old.” Our Hustler unique Chainless system has been developed to meet your demands. It is able to process every type of square or round bale with ease, even when it comes to the tightest of dry hay bales or the messiest of silage bales. Machines built to last to help minimize downtime, a luxury your operation can’t really afford.

After many years of use, the only thing that has ever gone wrong with his chainless bale feeder was needing to replace the platform.

“We were loading a silage bale on it one day and a two-year-old cattle beast decided that it was going to go at the bale before we had it down on the platform. It stood on the platform and put his foot right through it, but it was a simple job to fix it”.

Comfort and accessibility are also two important factors for Bill, “When you get old like myself, you don’t want to be climbing in and out of the tractor all the time, so I’d would have to be operated off the tractor seat just as much as possible.”

With the Hustler bale feeders, once you cut the wrapper off, you can just operated off the tractor seat: it’s is a huge benefit and it’s that simple to use!

“I would have no problem in recommending a Hustler because we have had 18 years of use without a mechanical failure and that’s got to be as good of a recommendation as anything!”

The CH2000 has been now replaced with the X2000 (LM104), the most versatile self-loading 3-point-linkage mounted chainless bale feeder available on the market, suitable for feeding out a wide variety of round and square bales and baleage. The X2000 (LM104) comes with great features and benefits:

Check out what Bill has to say! 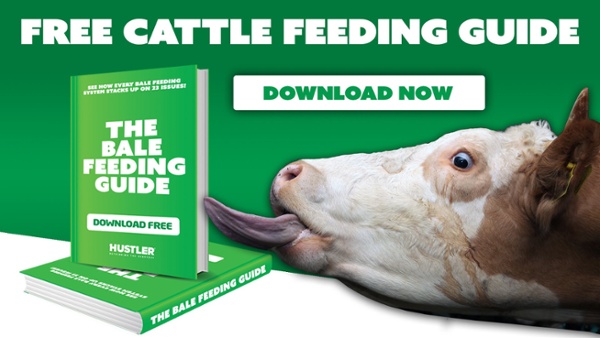 Our special congratulations to Bill Garland who has been made an Officer of the New Zealand Order of Merit (ONZM) for services to farming and conservation. Bill and Sue Garland are passionate about their land, the mountain that overlooks their property, and the native plants and animals that live there. They are managing Rahiri Farm so that it remains at least as productive for future generations as it has been for them.